9th Seminar of HITRIplus – FLASH radiotherapy with Carbon ions: is it possible to combine high LET and FLASH benefits? Experimental and modeling studies

Registration is now open for the 9th Seminar of HITRIplus – FLASH radiotherapy with Carbon ions: is it possible to combine high LET and FLASH benefits? Experimental and modeling studies, scheduled for January 18 (from 17:00 to 18:00).

Dr. Emanuele Scifoni is Experienced Senior Researcher at TIFPA, the Trento Institute for Fundamental Physics and Applications, of the National Institute for Nuclear Physics (INFN, Italy). In 2010 he joined the Biophysics department at GSI, Darmstadt, where he contributed substantially to the new developments in the research treatment planning code TRiP98, including new ions, multiple ions optimization and the kill painting method for hypoxic tumors, as well as to to the track structure code TRAX, including the design of its chemical stage extension TRAX-CHEM. He finally moved to Trento in 2016 where he also contributed to the setup of the Trento Proton Beam Experimental Facility and to the establishment of the BiMeR (BioMedical Radiation Physics) research group. He’s Principal Investigator and coordinator for the INFN CSN5 Call “MoVe IT”- Modeling and verification for Ion Beam Treatment Planning, and had a leading role in several successful international grants and projects in the field of particle therapy. His most recent research interests focus mainly on biological treatment planning for protons and ion beams, multiscale radiation biophysical modeling, micro-nanodosimetry and on elucidating mechanistic features of oxygenation interplay with radiation at the radiation chemistry level, including novel insights in FLASH radiotherapy.

Dr. Walter Tinganelli is a radiobiologist with more than ten years of international experience. After graduating in biotechnology at the University of Naples, Federico II, he received his Ph.D. from Darmstadt Technical University (TUD) in 2012.
After his doctorate, Dr. Tinganelli left for Japan to direct the International Open Laboratory at the National Institute of Radiological Sciences in Chiba. While in Japan, he was responsible for several research projects and coordinating a network of international collaborators.
After returning from Japan, he worked for two years at the Research Center for Heavy Ions (GSI) Darmstadt as a Principal Investigator and then in Italy at Trento Institute for Fundamental Physics and Applications (TIFPA), part of the Italian National Institute of Nuclear Physics (INFN). In Trento, Dr. Tinganelli was responsible for starting the radiobiology laboratory. In 2019 he returned to Germany at the GSI. Since then, he has headed the clinical radiobiology group in the Biophysics department. He is involved in projects related to cancer research and space radiation. He is also part of the Life Science Working Group of the European Space Agency, PTCOG vice-Chair of Biology (Europe), and a member of the Italian Radiation Research Society (SIRR) advisory board. 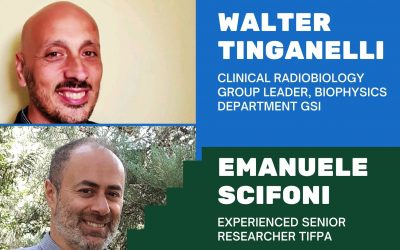 9th Seminar of HITRIplus – FLASH radiotherapy with Carbon ions: is it possible to combine high LET and FLASH benefits? Experimental and modeling studies

8th Seminar of HITRIplus – The Past, Present, and Future of CIRT for Cervical Cancer: Implementation of “Immuno-CIRT” considering the radiation-induced anti-tumor immune response

Time to attend at ICRI 2022 Side Event